It’s the very early days of 3 Minute Angels, and we were market testing the value of massages in pubs and clubs.

In the lead up to Christmas in 2001, there was handing out just under 1000 surveys to people in the Coogee Bay Hotel, a café in Neutral Bay, a nightclub on Oxford Street, a cigar lounge in Darling Harbour. These initial surveys told us that people would buy massages and would pay $10 for these on average. The thing we wanted to know was; how often someone would get a massage and the only way to find out was to give it a go.

That’s when Shish and Nooki joined our Founder, Wardy, at some of these places and offered massages. When we arrived at the first shift, we had to work out really basic things like how we should charge and record the massages. We didn’t have a name or a uniform, but we did have the gift of the gab, enthusiasm and youth on our side and began to massage.

When we tallied up at the end of just a few hours on a Friday night and had made a couple of hundred dollars each, we knew we were on to something.

That’s the series of events that transpired 20 years ago that created 3 Minute Angels.

Will 3 Minute Angels exist in another 20 years?

Will massage and workplaces be like they are now?

The answers will be surely revealed. 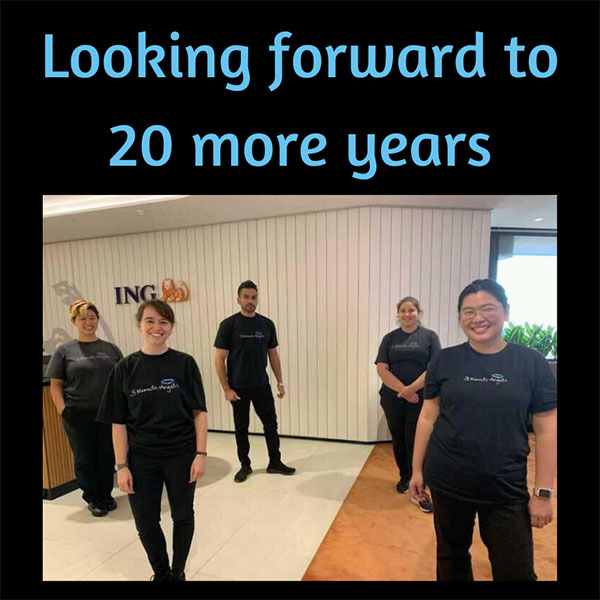 What we know with absolute certainty (and are grateful for) is that 3 Minute Angels is here today.

We’re looking forward to the events and corporate clients returning to pre-COVID levels.

We’re looking forward to improving the day for each person we touch. We look forward to making you feel divine.  At 3 Minute Angels, we are just stoked to have made it to 20 years and hope that we’ll enjoy 20 more.